Quinta Brunson received her first Emmy for outstanding writing for a comedy series for “Abbott Elementary,” and Jimmy Kimmel’s comic skit he delivered during her acceptance speech drew a lot of backlashes. 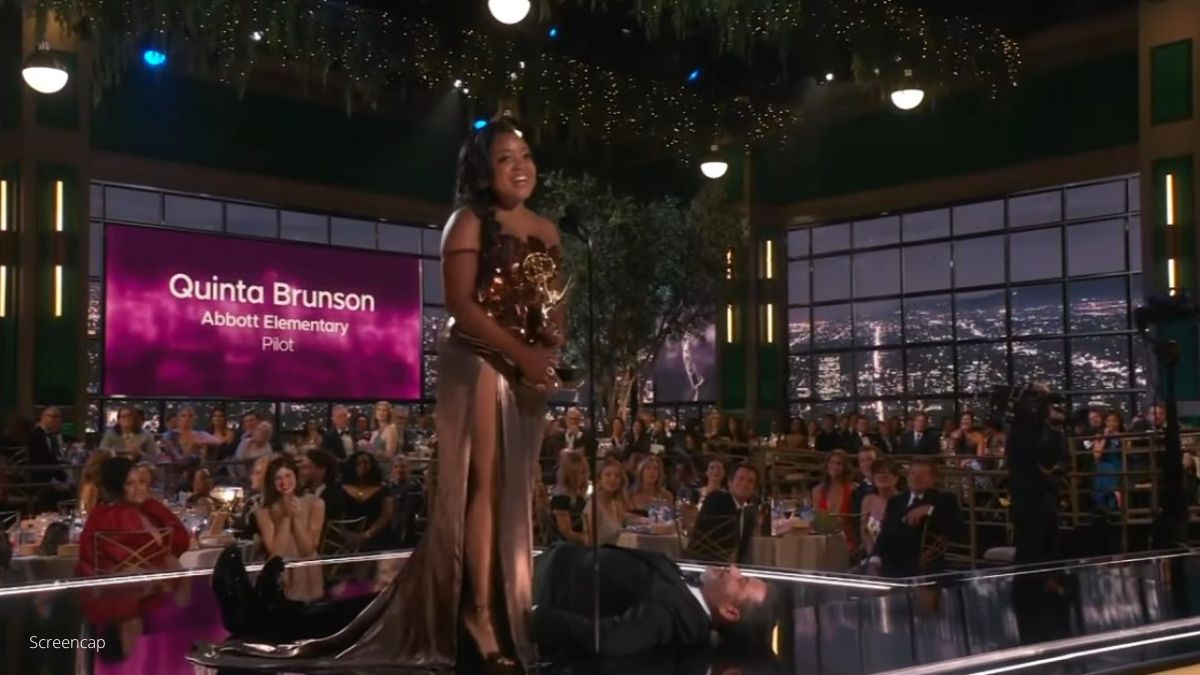 However, Kimmel regretted his actions when, Quinta Brunson, who created and starred in Abbott Elementary, responded to Jimmy Kimmel’s Emmy joke with her own and later received an apology from the late-night host whose joke was slammed as crude and worse.

On Wednesday, while Kimmel was performing his monologue, Brunson arrived. Kimmel had previously diverted attention from Brunson’s Emmy victory speech by lying on stage while acting inebriated.

Kimmel was flat on his back being carried by fellow presenter Will Arnett after the late-night host allegedly consumed too many “skinny Margaritas” when Brunson won the Emmy for best comedy series writing. The choice by Kimmel to give Brunson a thumbs-up for her prize but not to change it was criticised online by some as being insensitive and regarded as an example of white-male hubris by others.

Following the host’s widely derided stage antics at the Emmys on Monday, Brunson made an appearance on ABC’s “Jimmy Kimmel Live” on Wednesday. This time, Brunson interrupted Kimmel’s monologue, walking on the stage with her Emmy statute.

“I just I have a little favor to ask,” Quinta said. “So you know how when you win an Emmy you only have 45 seconds to do an acceptance speech, which is like not that much time. And then … you get less time because someone does a dumb comedy bit that goes on a bit too long?”

Later, calling his actions “dumb comedy bit,” he apologized to Brunson for stealing her moment. “The last thing I would ever want to do is upset you, because I think so much of you. I think you know that. I hope you know that.” stated the “Jimmy Kimmel Live” host.

Kimmel praised Brunson’s series and pointed out that despite numerous trips to the awards, he has never won an Emmy. Kimmel blamed Arnett for everything. Brunson replied by telling how she went one time and won it.

Kimmel made one final apology stating that he was dumb and that it will happen again.

Ralph expressed her disgust with Kimmel’s Emmy performance during a virtual panel discussion that Brunson and her cast mates participated in earlier on Wednesday. Ralph remembered, “I was like, ‘Oh, the disrespect, Jimmy.

It was “great that he was lying on the floor throughout her wonderful acceptance speech,” she sarcastically remarked. Ralph added that she told him too, in front of him, and he understood.