Jainism is one of India’s oldest religions, whose main essence is the concept of non-violence and karma. Most of the followers of this religion today can be found in western and north-western parts of India, especially in the states of Gujarat, Rajasthan, Maharashtra, and some parts of Karnataka.

It is in these states that we find numerous Jain temples dedicated to the Tirthankaras of the religion that attract thousands of tourists every year for their splendid eye-catching architectural designs and environment. In this article, we shall discuss the Muktagiri Jain temples of Betul on the borders of Maharashtra and Madhya Pradesh which is the pilgrimage spot of thousands of followers of Jainism.

India is home to more than 10000 major Jain temples dedicated to the 24 Tirthankaras of the religion. With more than 5 million followers, this is India’s sixth largest religion. Mahavir Jayanti is the most significant festival that takes place in these temples. Many followers of the Jain community are seen to visit these temples with the aim of achieving Nirvana or salvation.

Location of the Muktagiri Jain Temple 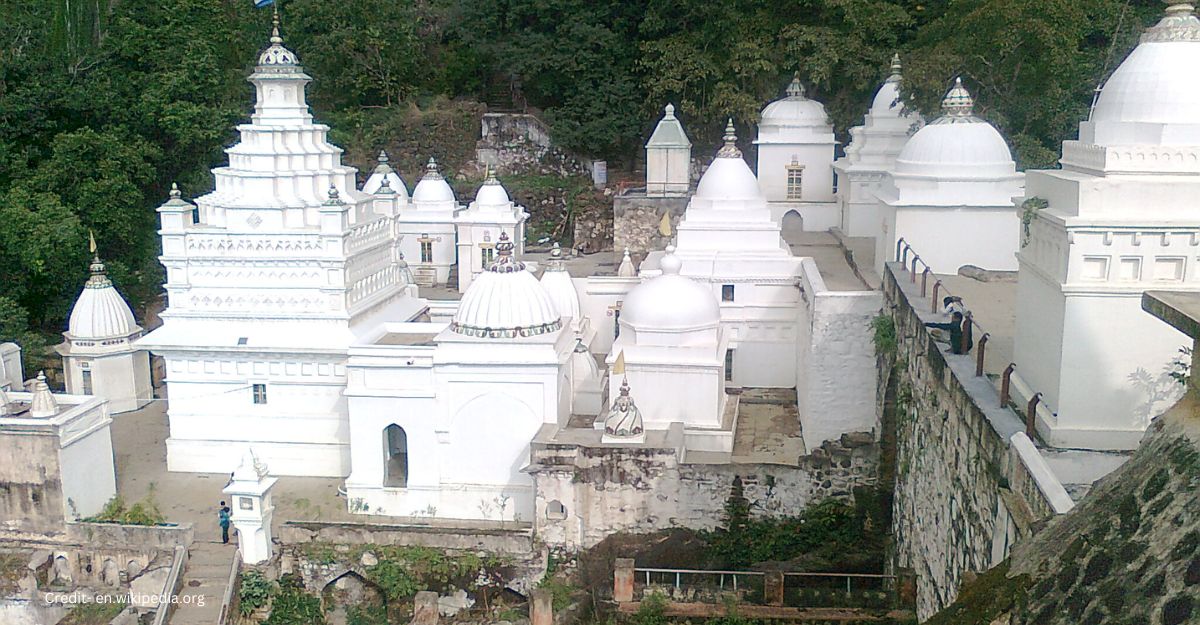 Muktagiri Jain Temple is a pilgrimage place of the Jains located on the borders of Madhya Pradesh and Maharashtra in Betul district. The main attraction of the place is a waterfall that is present just beside the temple rocks. It is situated 600 meters above the ground with stairs made to climb upwards.

There are about 350 steps to climb up to the top of the rocks.  People visit here as it is a local belief that anyone who visits this temple gets closer to attaining Nirvana or salvation, irrespective of one’s faith. The distance of the temple from Bhopal is around 275 kilometers, and from Mumbai, it is about 677 kilometers. The nearest railway station is about 55 kilometers away from the temple; from the station of Amravati bus services are available up to Muktagiri temple.

History of the Muktagiri Jain Temple The name of the place comes from a belief that there were showers of pearls when the 10th Tirthankara, named Sheetalnath, paid a visit to this place. There is also a belief that every eight centuries there is saffron rain takes place in the area. There are about 52 temples in the area, and the oldest temple is a cave that is said to have been built by Emperor Bimbisar about 2500 years ago.

King of Achalpur, Shripal developed this place to be a tirtha kshetra about 1500 years ago.  The family of Kalamkar is said to have been managing this temple complex for the past 200 years. It was the Kalamkars who had built several other temples in the place beside the old cave temple.

The architectural significance of the Muktagiri Jain temple 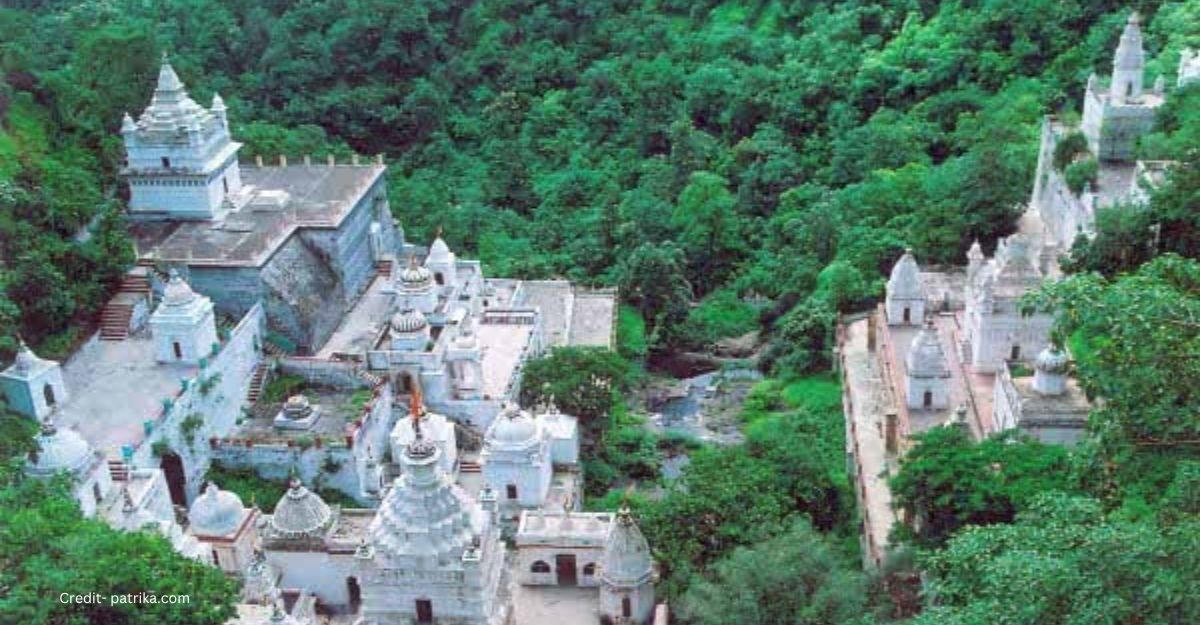 There is a lovely halt near the waterfall in between the steps that give a wonderful view of the natural beauty of the place, especially of the waterfall. There is a blend of old and modern Jain architecture that is observed in the temples with beautifully designed pillars and domes that attract the vision of the tourists.

There is a huge statue of Parshavnath in the cave temple. There are also 72 idols of Tirthankaras craved in the old cave temples. There are palanquins for physically disabled people to take them to the top of the hill. The divine ambiance of the place adds to the wonderful natural beauty and calmness of the place.

Timings of the Muktagiri Jain temple

The best time to visit the temple is between December to February and July to September. Mahavir Jayanti is the main festival of the Temple of Muktagiri when we can see crowds of thousands of followers of Jainism who visit this place during this time.

Places to stay near the Muktagiri Jain temple The Muktagiri Dharmashala is a place for pilgrims to stay near the temple complex. There are many other hotels to stay at near the temple. Some of the popular hotels include Hotel Konark, Aadya Hill View resort, Hotel Golden Plaza, Hotel Ayushi Resort, etc.; the prices of rooms start from 999 rupees to 2800 rupees per day on average, which are very affordable ones in this place.

Jain sacred texts have a reference to the greatness of this place as it is said that many saints have attained Nirvana after visiting Muktagiri. The divine vibe of the temple is the main attraction of pilgrims in the area. It is best if one can explore the whole place walking on foot. The wonderful view of the complex attracts thousands of tourists from all over India. Therefore, one can spend 2 to 3 hours of quality time in Muktagiri Jain temple when visited. 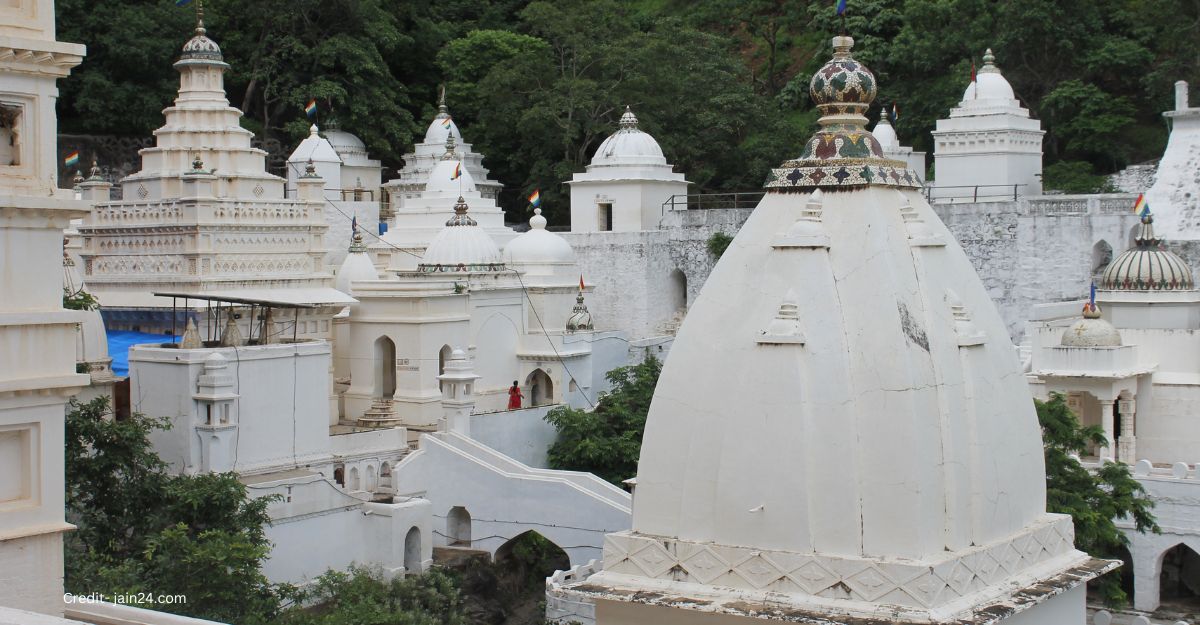 1. Where is Muktagiri Jain Temple Located?

2. How to reach Muktagiri Jain Temple?

The nearest railway station to the temple is Amravati; from Amravati Bus services are available to take pilgrims to the temple.

3. How many temples are there in Muktagiri?

There are 52 temples in the complex of Muktagiri; the oldest one is a cave temple.

4. Who built the oldest temples of Muktagiri?

The oldest cave temple of Muktagiri is believed to be around 2500 years old and was built by Emperor Bimbisar.

5. Is there any entry fee at Muktagiri Jain Mandir?

There are no entry fees to the temple of Muktagiri.

6. What are the timings of Muktagiri Jain Temples?

The temple is open for all in the morning from 6 AM to 11 AM, and entry is completely restricted after 11 AM.

7. What is the best time to visit Muktagiri?

The best time to visit the temple is between December to February and July to September.