Ginny and Georgia Season 2 is currently in post-production on Netflix, where it has wrapped filming. Here’s a summary of everything we know about the show’s second season so far, including who’ll be returning, what we can anticipate from the narrative, and when is the 2nd season going to premiere on Netflix. If you are thrilled to watch on your screens, here is good news.

Season one of Ginny and Georgia, created by Sarah Lampert, landed on Netflix on February 24th, 2021. The series is about a mother and daughter who relocate to escape their painful pasts. They face many challenges in their new life, exploring topics like crime and race, self-harm, and more lighthearted content like marriage and friendships.

Here’s everything you need to know about Ginny and Georgia series on Netflix, including whether the series will be renewed, what the story could entail, and what fans have to say about the new family drama.

How did Ginny and Georgia Season 1 End?

We can learn how well Ginny and Georgia performed on Netflix thanks to numerous sources, and what’s more, a well-known pop star provided the program with a significant boost in viewers shortly after its release. Taylor Swift was mentioned in the show in a fleeting joke line about how many guys one of the characters had gone through, comparing it to Swift’s exes over the years.

Ginny and Georgia Season 2 has not only been renewed by Netflix but also surpassed its target number of episodes. According to FlixPatrol data, the series remained in the US’s top 10 lists for 48 days and in the UK’s top 10 lists for 44 days. The show gained viewers in South Africa, most of Mainland Europe, and Australia.

After reviewing the world’s top 10 data for 2021, it is clear that the show currently ranks #6. In the United States, the show aired for 7 weeks on Nielsen’s top 10 list, racking up a total of 4,247 million viewing minutes. On IMDb PRO, the show debuted at #14 and shot up to #3 within one week after Taylor Swift tweeted about it.

On April 20, 2021, as part of their Q1 financial report to investors, Netflix revealed that 52 million people viewed the show within the first 28 days of its release.

In late September 2021, the series charted in the top ten for a second year, indicating that it had amassed 381 million viewing minutes. The program again ranked in the top 10s in 2022, which is unusual considering how much of today’s top 10s is dominated by newer material. We went into why the show returning to the top 10s was uncommon here, and we attributed TikTok as being responsible for Ginny and Georgia Season 2 appearing.

When was Ginny and Georgia Season 2 Renewed on Netflix?

It’s heard that Ginny and Georgia would return for a second season in late 2022 or earlier months of 2023.

“We are so appreciative of the tremendous response and love you’ve all shown Ginny and Georgia,” the show’s creators said in a statement. “We’re particularly grateful to Brianne and Toni, who set the greatest bar for every step of the way. We can’t wait to return to Wellsbury for Ginny and Georgia season 2.” 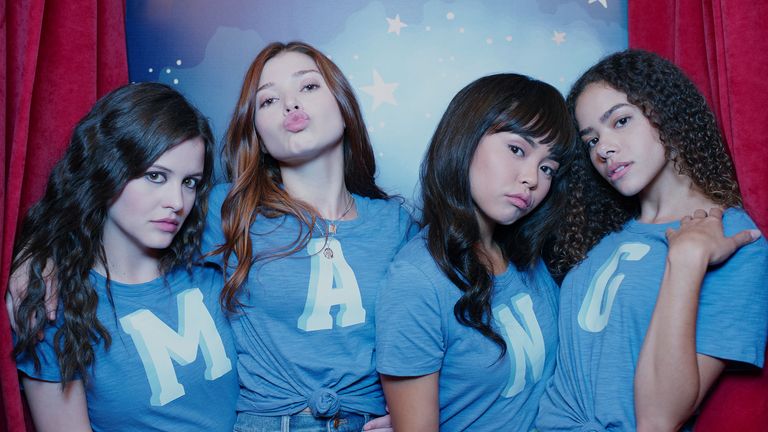 Given the Ginny and Georgia Season 2 trailer and updates to IMDb, Wikipedia, and other sources, we may infer that the following cast members will reprise their roles:

Season 1 left a lot of questions unanswered that season 2 needs to explore. For example, Ginny and her brother Austin took off on a motorbike to find his father; Austin was upset, Georgia hid letters from him, and Ginny recently discovered from a private investigator that Georgia killed her stepfather.

Meanwhile, Georgia is celebrating her engagement with Mayor Paul. However, there’s clearly still something unresolved about the private eye, which, after discovering the death of Georgia’s previous husband, learned that the one before equally vanished. There’s also the issue of Ginny breaking off her friendship group after it was revealed she had an affair with Marcus, Hunter’s twin brother.

Antonia Gentry, who plays Ginny in the show, spilled some hints about season 2 during an interview with Seventeen. “The stakes are significantly higher now than at the end of season one. I believe fans will be treated to a lot of tension, building up to a climax, and several interesting characters will emerge.”

There is no official Ginny and Georgia season 2 release date at the time of writing. However, season 2 will premiere in April 2021, as showrunner Debra J. Fisher stated, “We’re especially grateful to Brianne and Toni, who set the highest bar every step of the way… We can’t wait to return to Wellsbury for season 2.”

Filming began six months following the announcement of a second season renewal in November 2021. Filming appears to have ended on April 27, with Fisher recording the moment they completed filming for season 2 with an Instagram video. “That’s a wrap on season 2 of Ginny and Georgia,” she wrote in the Instagram description.

Production on the film has now ended, and it will be a simple matter of editing and post-production. So, depending on how long this takes, we expect a fall/winter 2022 release date.

Back in January of 2022, it was announced that actor Aaron Ashmore would be joining the cast for season 2. For those who don’t know him, he is best known for X-Men and recently had a recurring role in Locke & Key on Netflix.

Season 2 of Netflix’s Simone will introduce a new recurring character named Simone, according to what’s on Netflix. Simone is a Boston native who becomes Zion’s new girlfriend in season 2 and is a bright, career criminal defense attorney who does pro bono work. However, with the arrival of Ginny and Georgia at her doorstep, she finds herself in an impossible position.

Ginny’s life became complicated at the end of season one. Will she be able to fix things with her friends in Ginny and Georgia season 2, or will they get worse? After cheating on her boyfriend, Hunter, we think Ginny will pursue a relationship with her bad-boy neighbor, Marcus. Meanwhile, fans of the show can see the cast join David Spade, Fortune Feimster, and London Hughes in The Afterparty special.

Finally, before wrapping up, it should be noted that Lohengrin Zapiain, the series’ crew member and a surprising cast member who was previously believed to have been killed off, died.